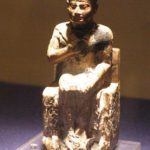 He is the ancient Egyptian pharaoh, who ruled during the Fourth Dynasty in the first half of the Old Kingdom period. Khufu is generally accepted as having commissioned the Great Pyramid of Giza, one of the Seven Wonders of the Ancient World https://youtu.be/c_8IJWHvC9Y

2. Abraham (2100 BC) In Judaism he is the founding father of the Covenant, the special relationship between the Jewish people and God; in Christianity, he is the prototype of all believers, Jewish or Gentile. Abraham is called by God to leave the house of his father Terah and settle in the land originally given to Canaan, but which God now promises to Abraham and his progeny 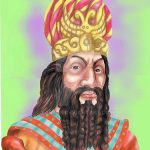 3. Hammurabi (1750 BC) He was the sixth king of the First Babylonian Dynasty. Hammurabi is known for the Code of Hammurabi, one of the earliest surviving codes of law. Hammurabi was an Amorite First Dynasty king in Babylon. Amorites were an ancient Semetic-speaking people. 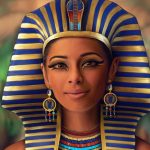 4. Queen Hatshpsut of Egypt (1480 BC) Hatchepsut means Foremost of Noble Ladies. She was the second female pharaoh. Her husband died early and her son was too young to rule. So she became an assistant ruler for her son but eventually became full-fledged ruler. Her statue was erased in an effort to remove woman pharaoh in history. She extended Egyptain trade and oversaw ambitious building projects. She built the temple Djeser-Djeseru. Basically, she ruled very well. https://youtu.be/8bYRy_wZEJI

This is a signature(?) food of my family. We are very sensitive eaters except me. It is hard to find a menu that all of us can enjoy together. This tomato pasta is one of the few we can eat together. But it has to be made real authentic. Staring from home-grown Heirloom tomatoes, parsley, and parmesan cheese, etc. I don’t like pasta in general, but this one is really good. Tomatoes are really sweet. There is no sour taste. I think anyone would like this kind of good quality food.

Why did Hitler kill Jews?

This is an interesting insight from a book called, “지적 대화를 위한 넓고 얕은 지식” in Korean. The author views world history developed based on economic situation. Germany after the World War 1 needed some kind of war in order to overcome their economic difficulties. In this war, Hitler needed a lot of money for war and the Jews were the group of people who had money during that times. You may know this facts, but I did not and I wanted to share with my kids. So I made an easy animated presentation with a software called VideoScribe.

Anyone who does not know Jesus goes to hell. Isn’t that unfare?

This question came out of genuine doubt from my kids. It is very valid question and also one of the important theological subject, Theology of Salvation (Soteriology https://bible.org/article/soteriology-doctrine-salvation)  Many theologians includes this subject in their systematic theology along with doctrine of God, doctrine of Holy Spirit, and doctrine of Church, etc.  This means that it cannot be easily answered. However, for kids, they demands a simple answer. Supposedly we say yes or no.

According to the Bible, Acts 4:12 says “And there is salvation in no one else, for there is no other name under heaven given among men by which we must be saved.” and also, (다른 이로써는 구원을 받을 수 없나니 천하 사람 중에 구원을 받을 만한 다른 이름을 우리에게 주신 일이 없음이라 하였더라)

John 14:6 says “I am the way and the truth and the life. No one comes to the Father except through me.” Therefore if you don’t know Jesus you cannot be saved or you cannot come to Father. (내가 곧 길이요 진리요 생명이니 나로 말미암지 않고는 아버지께로 올 자가 없느니라)

This kind of approach, which references the Bible and supports your claim, is a kind of “biblical theology” or fundamentalist approach. Of course the definition of biblical theology is broader than this, but this approach is a way of using the Bible and and confirm your theological concept. If you prefer to this approach, there is no need for further thinking. the answer is so clear because the Bible says so.

Should I teach my kids this way? maybe not. Why not? because I feel obligated more answers.

Let’s say, “no you are not necessarilly go to hell even though you don’t know Jesus.” First let’s check what the Bible says about this. the Bible does not explicitly say those who never heard of the gospel goes to hell. But the Bible says Jesus is the only way for salvation.

This means that even though the Bible does not say explicitly, we can infer what that means. Yes you can, but still this is your inferred statement. We are not sure what God would actually do?

When we try to find an answer from the Bible, sometimes the Bible does not have explicit answers to all the questions. This is because the Bible is written around 2000 years ago and there are a lot of new things today, which did not existed long time ago. For example, what does bible say about evolutionism? None, because this scientific idea never exists until recently. In case like this we have to interpret the Bible to find an answer with the guide of Holy Spirit. This kind of approach can be called “systematic theology”

One of the clear example of the topics of systematic theology is the doctrine of Trinity. In the Bible there is no word, Trinity. This is the word coind by one of the early church Fathers based on the teaching of the Bible. So if we try to find an answer with systematic theology, we may say that those who never heard of the gospel can be saved too.

First, God’s intention of salvation is to save everyone in the world, but the world still has so many people who never heard of Jesus. That means most of us in the world cannot be saved. Is this God’s intention? It cannot be. Because there were a lot of people before Jesus, and even after Jesus. There a lot of kids who died by accidents or disease without knowning the gospel. Does that means these innocent kids go to hell? I don’t think so, because God is God of justice and fair. We believe God would not do such an unfair judgment.

Second, there is a theological concept called, general revelation. This means that God is revealed through nature to everyone. Romans 1:19~20 says “since what may be known about God is plain to them, because God has made it plain to them. For since the creation of the world God’s invisible qualities–his eternal power and divine nature–have been clearly seen, being understood from what has been made, so that men are without excuse.”

This means that without the Bible or Jesus, special revelation, people still can recognize God and live according to the natural law in their heart. Then these people might be saved

In conclusion, then what is the answer? I may say we don’t know for sure. Only God knows. and What we know for sure is God is God of justice and love. If you are lucky enough to know the grace of Jesus, which is good, then you would be saved. But we may ask, “are you sure about this?” There are many Christians even in church today who does not live like Christian. And you are good Christian right now, but you never know you would abandon Jesus like disciple Peter and at the end Jesus might say to you, “I never knew you.”

Then what should we do?

Regarding some theological issue, it is not a good attitude to say with certainty just because the Bible says so, because the same Bible might say a little differently or not exactly the same. We are trying to search the Truth, but you can never be sure you have it. This does not mean there is no real Truth in the world. But it means that we need to be humble about claiming the truth and so we need to leave the final judgment to God.